This page is set up to help share information regarding health, which basically is rooted in nutrition.  Again, I remind you that this is information that I am sharing with you, so take what resonates with truth and leave the rest.  Do your research and apply anything you learn here with care and caution.
How Cooking Can Change Your Life
A Short 20 Minute Video
Path to Freedom: Urban Homestead (Link to website)
Link to Youtube Channel
Hungry For Change
From the creators of the groundbreaking documentary FOOD MATTERS comes another hard-hitting film certain to rock your world. HUNGRY FOR CHANGE exposes shocking secrets the diet, weight loss and food industry don't want you to know about.
Click here to go to website. 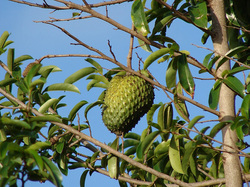 The Soursop is a flowering, evergreen tree native to tropical regions of the world. It also contains a long, prickly green fruit which happens to kill cancer up to 10,000 times more effectively than strong chemotherapy drugs, all without the nasty side effects and without harming healthy cells.

According to Cancer Research UK, Annona muricata is an active principle in an herbal remedy marketed under the brand name Triamazon. The licensing for this product in the UK is not accepted due to its enormous healing effects on the body and potential loss of profits for competing pharmaceutical cancer drugs.

This tree is low and is called graviola in Brazil, guanabana in Spanish and has the uninspiring name “soursop” in English. The fruit is very large and the subacid sweet white pulp is eaten out of hand or, more commonly, used to make fruit drinks and sherbets.

Besides being a cancer remedy, graviola is a broad spectrum antimicrobial agent for both bacterial and fungal infections, is effective against internal parasites and worms, lowers high blood pressure and is used fordepression, stress and nervous disorders.

Deep within the Amazon Rainforest, this tree grows wild and could literally revolutionize what you, your doctor, and the rest of the world thinks about cancer treatment and chances of survival.

Research shows that with extracts from this miraculous tree it now may be possible to:

* Attack cancer safely and effectively with an all-natural therapy that does not cause extreme nausea, weight loss and hair loss
* Protect your immune system and avoid deadly infections
* Feel stronger and healthier throughout the course of the treatment
* Boost your energy and improve your outlook on life

The source of this information is just as stunning: It comes from one of America’s largest drug manufacturers, the fruit of over 20 laboratory tests conducted since the 1970′s. What those tests revealed was nothing short of mind numbing…Extracts from the tree were shown to:

* Effectively target and kill malignant cells in 12 types of cancer, including colon, breast, prostate, lung and pancreatic cancer.
* The tree compounds proved to be up to 10,000 times stronger in slowing the growth of cancer cells than Adriamycin, a commonly used chemotherapeutic drug!
* What’s more, unlike chemotherapy, the compound extracted from the Graviola tree selectively hunts down and kills only cancer cells. It does not harm healthy cells!

The amazing anti-cancer properties of the Graviola tree have been extensively researched–so why haven’t you heard anything about it?

The drug industry began a search for a cancer cure and their research centered on Graviola, a legendary healing tree from the Amazon Rainforest.

It turns out the drug company invested nearly seven years trying to synthesize two of the Graviola tree’s most powerful anti-cancer ingredients. If they could isolate and produce man-made clones of what makes the Graviola so potent, they’d be able to patent it and make their money back. Alas, they hit a brick wall. The original simply could not be replicated. There was no way the company could protect its profits or even make back the millions it poured into research.

As the dream of huge profits evaporated, their testing on Graviola came to a screeching halt. Even worse, the company shelved the entire project and chose not to publish the findings of its research!

Where Can You Find It?

As far as the fruit goes, you may be able to find it at some grocery and health food stores in your area. There are several different soursop juice manufacturers, distrubutors and suppliers worldwide. Caution would be warranted in purchasing from any company unless you have researched their reputability and extraction methods.

Sources:
wikipedia.org
curezone.com
graviolasecret.com
graviolaworld.com
NOTICE:  The documentary film "Fat, Sick and Nearly Dead" was posted on here via youtube, but has been removed due to copyright infringement.  I still highly recommend the viewing of this film, so please search for it or click on netflix or even on youtube, which carries it for $1.99 fee.
GENETIC ROULETTE (2012) [FULL DOCUMENTARY]
When the US government ignored repeated warnings by its own scientists and allowed untested genetically modified (GM) crops into our environment and food supply, it was a gamble of unprecedented proportions. The health of all living things and all future generations were put at risk by an infant technology.
After two decades, physicians and scientists have uncovered a grave trend. The same serious health problems found in lab animals, livestock, and pets that have been fed GM foods are now on the rise in the US population. And when people and animals stop eating genetically modified organisms (GMOs), their health improves.
This seminal documentary provides compelling evidence to help explain the deteriorating health of Americans, especially among children, and offers a recipe for protecting ourselves and our future.
(Click HERE to watch film)
GMO Ticking Timebomb
Genetically Modified Organism (GMO), sounds like something you wouldn't want to touch or eat, right?  Well guess what.  About 90% of what you eat is comprised of some sort of GMO.  Watch and learn...
How To Halt Diabetes In 25 Days (PDF Book Link)
Juicing For Health (PDF Book Link)
Raw Food Recipes Covered On The Show "What On Earth Is Happening" Episode #96 (PDF Link)
Youngevity is dedicated to delivering solutions to help health-conscious consumers Live Younger, Longer. Established in 1997 by Drs. Joel Wallach, DVM, ND and Ma Lan, MS, MD , and headquartered in San Diego, California, they offer a wide range of products and services to support a healthy lifestyle, including:

These state-of-the-art, high quality products and services are
distributed through a global network of more than 70,000 independent business owners.
Link to Youngevity website.

Did this grandfather, 78, really beat 'incurable' cancer just by changing his diet? Extraordinary story of the man who got 'all-clear' after swapping red meat and dairy products for 10 fruit and veg a day. 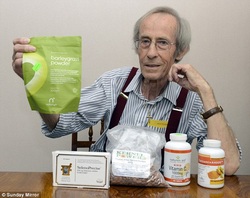 A grandfather, who was told by doctors that his cancer was 'incurable', has been given the all-clear less than four months later - after trying a different diet.

Allan Taylor could have been forgiven for fearing the worst when doctors told him they could do nothing to treat his condition.

But the 78-year-old would not give up, and instead searched the internet for an alternative method to fight his cancer.

Given the all-clear: Allan Taylor, 78, beat cancer by changing his diet and taking herbal remedies

After studying websites, he decided to radically change his diet - and found his condition improved dramatically.

Mr Taylor made the changes after he received a letter on April 30, telling them were was no point having any more chemotherapy as it would not cure him and neither would an operation.

'They said if they cut out the cancer it would just pop up somewhere else,' he told the Sunday Mirror.

'But I was determined to stay positive and decided to find my own cure.

'On August 6 I got a letter from North Tees hospital to say a scan had shown my cancer had gone and "the abnormality is no longer visible". I’m all clear.'

Mr Taylor's ordeal began in February last year when he noticed a two-inch lump in his abdomen. He was sent for a scan and told he had colon cancer.

Last September he underwent an operation, during which a surgeon removed a nine-inch section of his colon, and he began a three-month course of chemotherapy.

But in April this year he was told the cancer had spread to small intestine.

He used the information, together with advice from his local health food store, to devise his new diet.

He believes that having a teaspoon of powdered barley grass in hot water every morning and night was particularly crucial.